Mr. Andrews graduated high school from Monticello in 1994. He attended Millikin University where he wrestled, played football, and earned a Bachelor’s degree in Elementary Education. Mr. Andrews has since earned a Master’s degree in Educational Administration and has also completed the coursework for the Superintendent’s Certification, both from Eastern Illinois University. Mr. Andrews has taught both 1st grade and 4th grade. He has served 2 years as an Assistant Principal at Thomas Jefferson Middle School, 4 years as a Principal at French Academy, 2 years as an Assistant Superintendent of Schools for the Macon / Piatt Regional Office of Education, and 6 years at Dennis Lab as the Principal. Mr. Andrews has an awesome wife, Sarah, and three incredible kids: Calvin, Sam, and Emmy. Some hobbies Mr. Andrews enjoys are wood working, camping, fishing, hunting, and cooking out. Last, but not least, Mr. Andrews believes in hard work, the growth mindset, and challenging students to dominate their education. 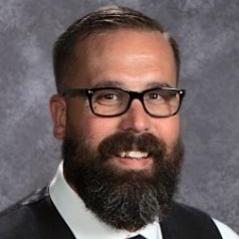